Paul’s Letter to the Colossians 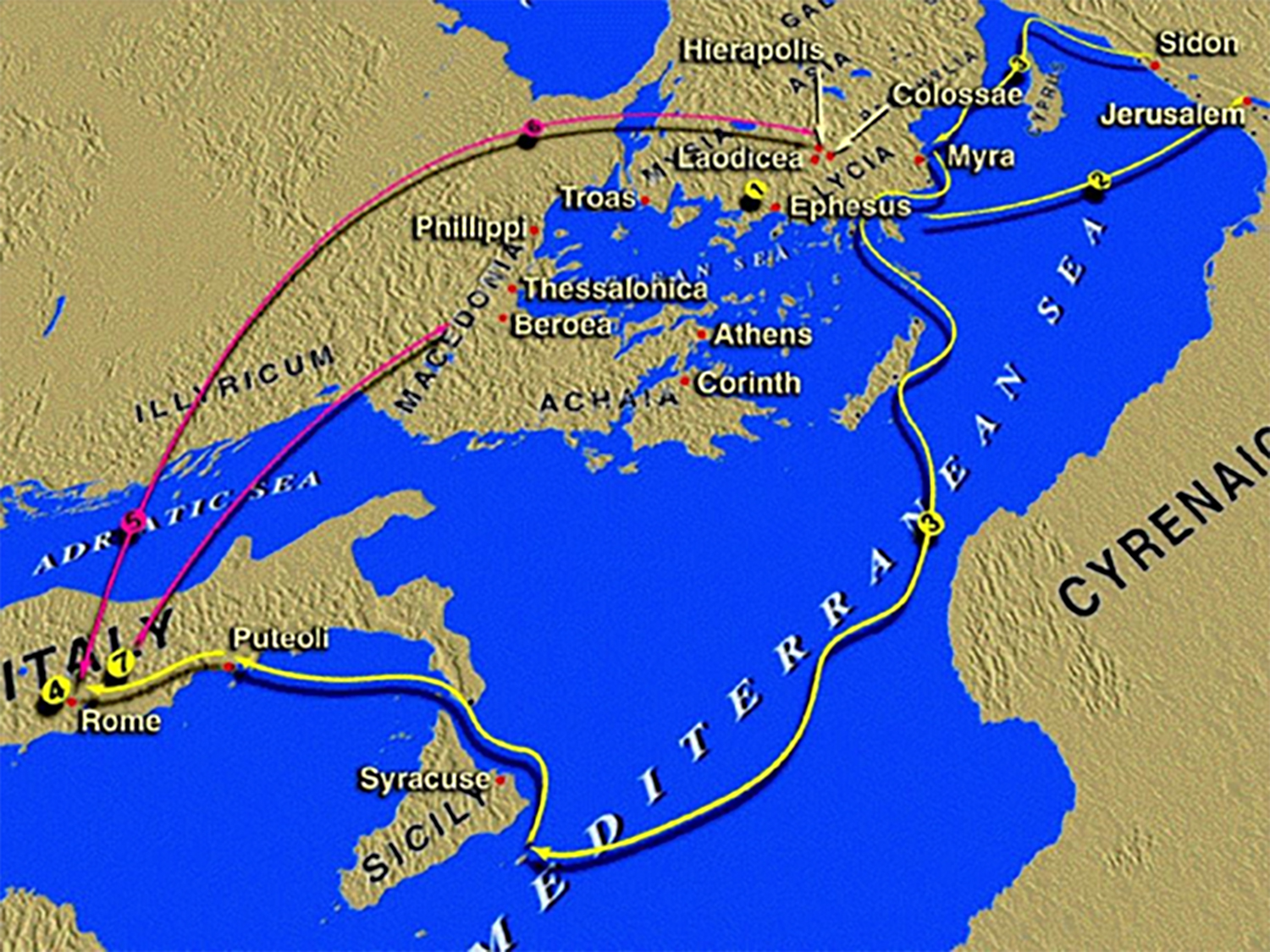 1. Title.
Like Paul’s other epistles, this one probably bore no title originally, for it is a letter. The earliest extant manuscript has the simple title Pros Kolossaeis (“To [the] Colossians”), which doubtless was added by an early scribe when Paul’s letters were collected and published as a unit. From ch. 1:2 it is obvious that such a title is correct.

2. Authorship.
This epistle bears the names of Paul and Timothy as authors (ch. 1:1).
However, repeated references in the letter show that it is really Paul writing (see chs. 2:1; 4:3, 4, 7, 8, 13, 18), in both his own name and that of his younger associate. The early church was unanimous in attributing the letter to Paul. Although the more extreme criticism of the 19th and early 20th centuries held that this book was not written by Paul, today scholars generally assign it to him. Concerning the date of writing see Vol. VI, pp. 105, 106.

3. Historical Setting.
How or when or by whom the Colossian church was founded cannot be definitely known. Paul made Ephesus the headquarters of his missionary enterprises for about three years (Acts 20:31). His vigorous prosecution of evangelism during this time led Luke to declare, “All they which dwelt in Asia heard the word of the Lord Jesus, both Jews and Greeks” (Acts 19:10). Even Demetrius affirmed that “almost throughout all Asia, this Paul hath persuaded and turned away much people” (Acts 19:26) from paganism. Writing to the Corinthians toward the end of his sojourn in Ephesus and its environs, the apostle sent greetings from “the churches of Asia” (1 Cor. 16:19). This indicates that Roman Asia was his mission field at this time (cf. 2 Cor. 1:8; Rom. 16:5, where the correct reading is “Asia”). To the great seaport of Ephesus would flock visitors from all Asia, and Paul’s messages must have been scattered far and wide by the returning travelers (Acts 19:10). Perhaps in this way the two citizens of Colossae, Epaphras (Col. 4:12) and Philemon (Philemon 1; cf. Philemon 10, 11; Col. 4:9), heard the glad tidings of salvation. They, with others, may have taken the gospel back to their townspeople (see ch. 1:7).
Thus, although Paul himself may not have founded the Colossian church (see on ch. 2:1), he probably was, in a very real sense, its father. From this epistle it is clear that he held himself responsible for the spiritual condition of the Colossian Christians, and that he knew well their needs and the dangers in which they stood. This information was brought to him in Rome, apparently by Epaphras (see Col. 1:8; cf. Philemon 23), and afforded the immediate reason for his writing the epistle to them. The danger confronting the Colossian believers arose from false teachings that were spreading among them. The precise details of these teachings at Colossae cannot be ascertained. Some scholars have identified them as being of two different types, Judaizing and Gnostic. Unquestionably they contained Judaizing tendencies, and some of the false doctrines alluded to in this epistle are similar to those held by certain Gnostics in the 2d and 3d centuries.
However, in view of the very great uncertainty of the whole picture, it is probably safer to understand the false teaching at Colossae as a mixture of Judaism and some type of Oriental paganism (perhaps an early form of Gnosticism) rather than as two separate systems of teaching. Both Jewish apocalyptic literature and the Dead Sea scrolls show that such mixtures were not uncommon among the Jews of the time. The concept of the angels as organized into orders (see on Col. 1:16) is a familiar one in Jewish apocryphal literature. And as portrayed in Colossians it seems to be verging on the idea of emanations as found in later Gnostic writings (see Vol. VI, p. 56). The terms “mystery” (ch. 1:26, 27) and “knowledge” (ch. 2:3)—which Paul seems here to be taking out of the mouths of the false teachers and using in a Christian sense—appear in the Dead Sea scrolls almost as technical religious terms. These words certainly enjoyed such status in the pagan mysteries and in Gnosticism. The word “fulness” (Gr. plērōma; ch. 1:19), which, Paul declares, dwells in Christ, at least later was a standard Gnostic term for the emanations, the subsidiary intermediate beings who were thought to issue from God and mediate between Him and the world. How far these concepts had developed at Colossae it is impossible to say.
However, this much seems clear. The false teachers at Colossae were teaching the existence of angelic beings arranged in different orders, intermediate between God and the world, who acted as mediators for men, brought them salvation, and merited their worship. At the same time these teachers insisted on an extremely legalistic ceremonialism, following the Jewish pattern, and emphasizing circumcision, taboos in matters of food and drink, and observance of festivals. Against such teachings Paul wrote the Colossian epistle.
The place of writing of this epistle was doubtless Rome and the time of writing about A.D. 62, during the time of Paul’s first imprisonment (see Vol. VI, pp. 105, 106).

4. Theme.
In the Epistle to the Colossians, Paul expresses himself strongly against the heresy prevalent in that church.
In Galatians and elsewhere he rebuts Judaism solely, but here his target is hybrid. Not only is Paul concerned to refute Judaizing legalism, he also must contend with certain pagan elements that sought to degrade or eclipse the office of Christ. Therefore he attacks the idea of angelic intermediaries as agents of creation and mediation. He declares that Christ is Creator and Mediator exclusively (ch. 1:16, 20). Christ is the “head” of both material and spiritual things (chs. 1:18; 2:19). There exists in Him no dualism. The same Jesus is over all (ch. 1:18). He sustains all things (v. 17). He is God (v. 15). In Him the “fulness” dwells (v. 19). He needs no subsidiaries, or emanations. Paul asserts that in Christ are “all the treasures of wisdom and knowledge” (ch. 2:3). The consummate, saving mystery is not some esoteric knowledge concerning the various orders of angels (see on ch. 1:16), but “Christ in you, the hope of glory” (v. 27). Therefore he condemns the worship of angels, which the false teachers advocated, as a denial of Christ’s perfection as sustainer and mediator (ch. 2:18, 19).
The apostle also deals with the moral results of these heresies. Too rigid asceticism and unbridled license are alike prohibited (chs. 2:16, 20, 21; 3:5, 8, 9). Both heresies claim sovereignty for the human will. This “will worship” is a false, or inverted, humility, and therefore reprehensible. All carnal indulgences (and the apostle’s list is well-nigh exhaustive) are stringently condemned. Paul presents Christ as the Creator and Sustainer of the universe, the Head and Mediator and Emancipator of the church. In Christ, principle is substituted for ceremonial. Clearly, logically, vigorously, the apostle writes to his friends at Colossae, persuading them to turn from vain and vapid speculations to the reality of the gospel of Christ.