Paul’s Letter to the Philippians 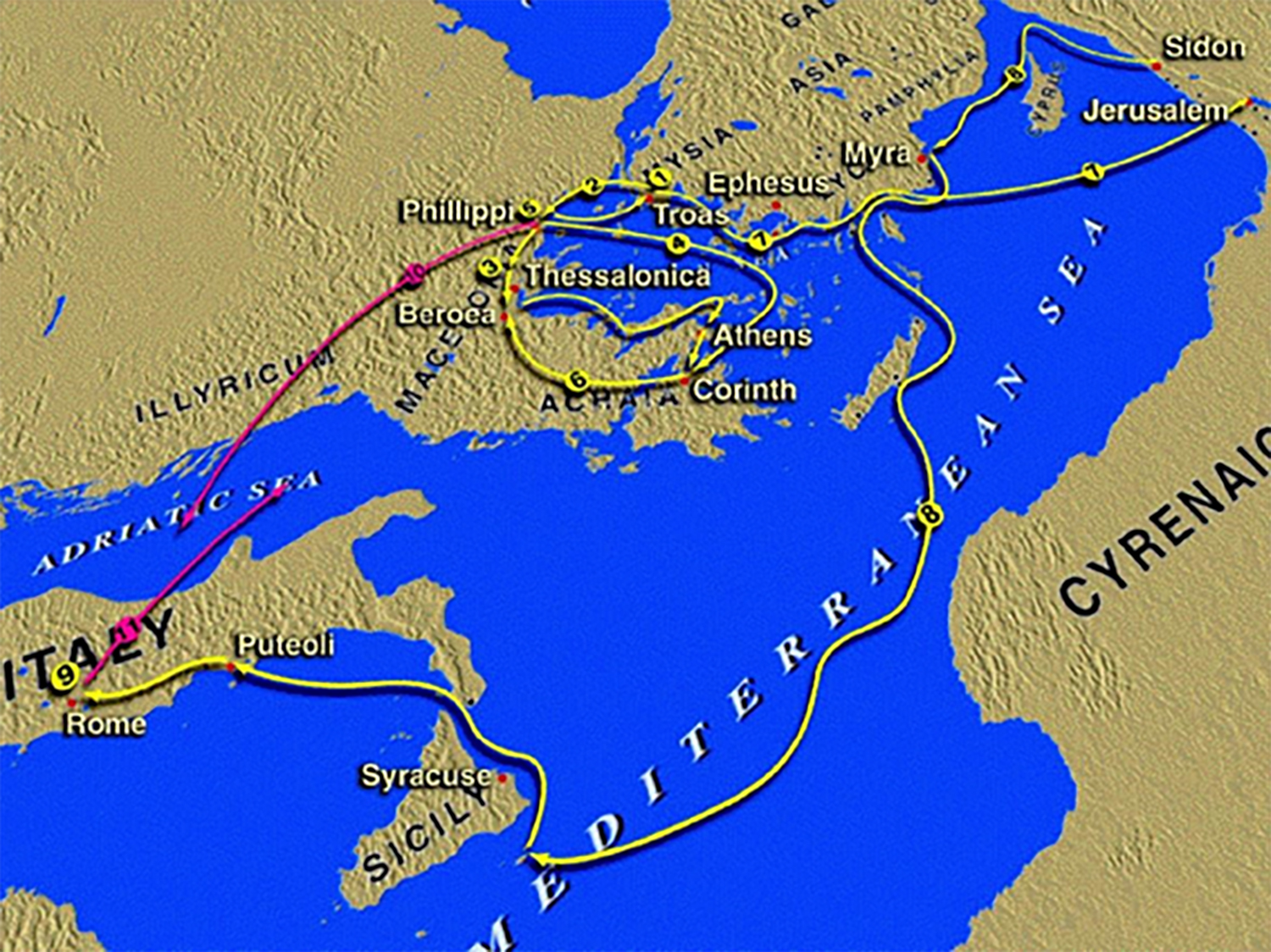 1. Title.
This letter draws its title from the fact that it is addressed to the Christians of Philippi, a city of Macedonia. For a history of the city see on Acts 16:12. The earliest manuscripts, going back to the 3d century, bear the simple title Pros Philippēsious (“To [the] Philippians”).

2. Authorship.
Within the letter itself the apostle Paul is designated as the author (ch. 1:1). He represents Timothy as one of his associates (chs. 1:1; 2:19), and refers to his own imprisonment (ch. 1:7) and to his former preaching in Macedonia (ch. 4:15), in a manner that is entirely natural and in harmony with what is known of Paul’s life. The early church unanimously recognized this letter as being from Paul. The first non-Biblical testimony to its Pauline authorship comes from the Christian leader and martyr Polycarp, about the middle of the 2d century (see Vol. V, p. 125). Evidence for Pauline authorship is so strong that there is little room for doubt. Concerning the date of writing see Vol. VI, pp. 105, 106.

3. Historical Setting.
The epistle to the Philippians was written from Rome during Paul’s first imprisonment there (see Vol. VI, pp. 105, 106). More than ten years had passed since Paul had first preached the gospel at Philippi. Luke describes the circumstances of the apostle’s first visit there (Acts 16). While at Troas, on the northwest coast of Asia Minor about A.D. 50, the apostle had received a vision in which he beheld
“a man of Macedonia” pleading with him, “Come over into Macedonia, and help us” (Acts 16:8, 9). Paul and his companions, Silas, Timothy, and Luke, responded immediately, and went by way of Neapolis to Philippi, the first place in Europe where the gospel was preached (see on Acts 16:11, 12). There the missionaries joined a little group of worshipers by the river outside the city (see on Acts 16:13). Outstanding among those present was Lydia, “a seller of purple, of the city of Thyatira.” Lydia and her household readily received the apostles’ message, were converted and baptized. Afterward, as Paul and Silas went about their work of teaching, they met a slave girl possessed of a spirit of divination; she repeatedly proclaimed them as “servants of the most high God.” When Paul cast out the spirit, her former masters stirred up a mob against the apostles, with the result that Paul and Silas were beaten and cast into prison. Then came an earthquake at midnight, followed by the conversion of the jailer and his family. Thus the Philippian church was formed, with its charter members the purple-seller from Thyatira and her household, the jailer, who was probably a Roman (see on Acts 16:23), and his household, and others.
Several years later, on his way back to Jerusalem, as he completed his Third Missionary Tour, Paul stopped again at Philippi. It was the time of the Passover, and the apostle kept the feast with the believers. He must have enjoyed the period of peaceful and happy communion thus afforded him with those who were among the most loving and truehearted of all his converts (Acts 20:6; cf. AA 390, 391).
Soon after his return to Jerusalem, Paul was arrested and imprisoned at Caesarea for at least two years (Acts 24:27). Then came the trip to Rome, where he spent “two whole years in his own hired house” (Acts 28:30). Doubtless it was during this period of imprisonment that Paul wrote his epistle to the Philippian church, as well as the letters to the Colossians, the Ephesians, and to Philemon. Rome is not mentioned in the Epistle to the Philippians, but Paul’s reference to Caesar’s household (ch. 4:22) and his expectation of a speedy release (ch. 2:24) suggest Rome as the place of writing.
From the letter one gains considerable insight into the situation at Philippi, the condition of Paul, and the relation between the apostle and the Philippian believers. The church at Philippi was led by bishops and deacons (ch. 1:1). Its members were suffering persecution (v. 29). Apparently there had been some tendency to discord, especially between two of the women members (ch. 4:2), but there is no hint of moral corruption or erroneous doctrine. There is little to disturb the joy and thankfulness with which the apostle contemplates the Philippians’ growth in grace. Their love for him is unchanged. They had sent Epaphroditus, one of their leaders, to convey their gifts and to minister to Paul in his affliction (ch. 2:25). Paul thought that he might be released soon, and expressed a hope of shortly seeing them again (chs. 1:26; 2:24). Later, he was freed and for a time worked among the churches he had helped to establish, possibly including the church at Philippi (see AA 487).
The immediate occasion for the writing of the letter was that Epaphroditus, who had been seriously ill during part of his stay with Paul in Rome, was now well enough to return home to Philippi (ch. 2:25-30). The church was eager to have Epaphroditus come to them, and Paul wished to take advantage of the opportunity to send a message thanking his friends for sending him gifts, telling them of his condition, and reminding them of his prayerful interest in them.

4. Theme.
The Epistle to the Philippians is a letter from a friend to friends, a letter of spiritual counsel, written in acknowledgement of loving help. Paul tells the Philippian believers of his bonds, of the progress of the gospel at Rome, of the endeavors of certain adversaries to distress him by factious opposition, preaching Christ, as they did, out of envy and party spirit (ch. 1:12-17). He tells them of the inward peace and joy that bore him up in all his afflictions. He feels sure of their sympathy; he writes in the fullest confidence of Christian friendship. His joy is their joy. He tells them of the uncertainty of his future; he does not know how his trial will end, in death or in life. He is prepared for either event—a holy life is blessed, a holy death also blessed (vs. 19-24). He tells them of his thankful acceptance of their gifts. He had been unwilling to receive aid from other churches, but with them he was on terms of the very closest intimacy, and that affectionate and trusting friendship made him ready to accept their help (ch. 4:14-17). He valued it, not so much as an alleviation of his own hardships, but rather as an additional evidence of their love to him and of their growth in that charity which is the first of Christian graces. For himself, he was content. He had learned to be self-sufficient in the Christian sense: none felt his own weakness more than he, but he could do all things through the strength of Christ (vs. 10-13).
Thus the theme of the epistle is joy in Christ. Though it was written in prison, with Paul unaware of what lay ahead, the words “joy” and “rejoice” are used again and again. The phrase “in Christ” is used repeatedly, and when joined with the thought of joy, well expresses the theme of the epistle.