Paul’s Letters to the Thessalonians 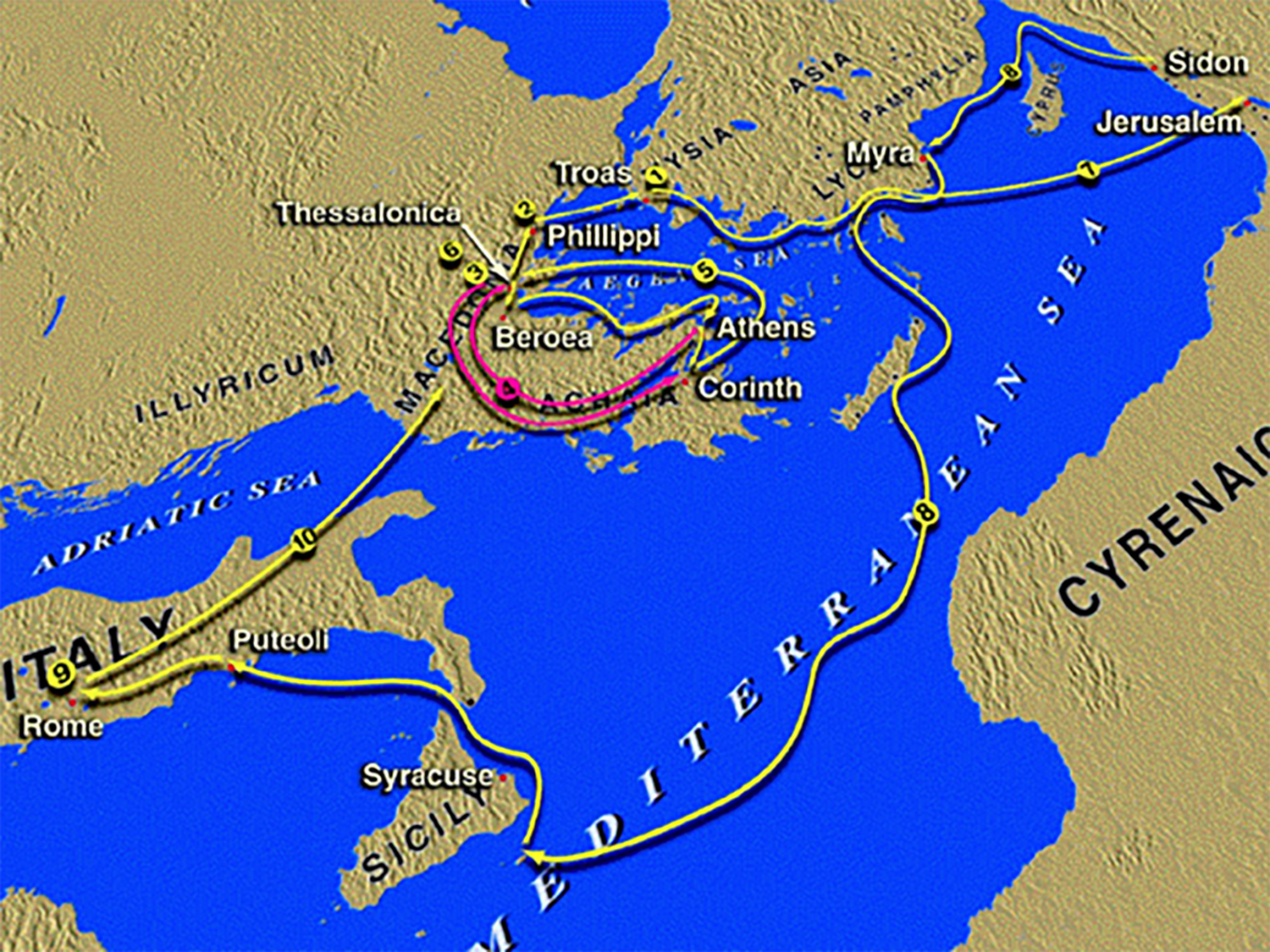 1. Title.
In the earliest Greek manuscript the title of this epistle is simply, Pros Thessalonikeis A (“A To [the] Thessalonians I”). The considerably lengthened title in the KJV, “The First Epistle of Paul the Apostle to the Thessalonians,” is the result of later elaboration.

2. Authorship.
The epistle purports to be from Paul, Silvanus (Silas), and Timotheus (Timothy) (ch. 1:1). However, it is basically the work of Paul (see chs. 3:1, 2, 6, 7; 5:27). It is included among Paul’s letters in the earliest list of NT books, the Muratorian Canon (A.D. 170). The early church writers, Irenaeus (c. A.D. 130-c. 202), Clement of Alexandria (died c. 220), and Tertullian (c. A.D. 160-c. 240), considered Paul to be its author. The personality and style of the apostle Paul pervade the epistles. His love for his converts and the burden he bears for their spiritual welfare are manifest throughout. The emphasis upon the great spiritual qualities of faith, love, and hope is distinctly Pauline (cf. 1 Cor. 13:13). Scholars today are in general agreement that Paul was the author of the epistle. Concerning the date of writing see Vol. VI, pp. 102, 103.

3. Historical Setting.
Thessalonica was an important city, and the capital of the second division of Macedonia (see on Acts 17:1). It was situated at the head of the Thermaic Gulf, now known as the Gulf of Salonika. The Egnatian Road, which connected the East with Rome, passed through it. The favorable location and excellent harbor of Thessalonica combined to make it of great commercial importance. Possibly for this reason it possessed a large Jewish settlement and a synagogue (Acts 17:1). The city, now called Salonika, is one of the most important commercial centers of northern Greece.
In addition, it is archeological interest, for the triumphal arch that crossed the former Via Egnatia still stands as a reminder of the glory and power of ancient Rome.
Paul’s first contact with Thessalonica was on his Second Missionary Journey, immediately after his departure from Philippi (Acts 16:40; 17:1). Since it was his method of evangelism to preach in the important cities first, and thus to make them centers for the spread of the gospel to the surrounding towns and villages, he and his companions made their way from Philippi directly to Thessalonica, not stopping to preach in the towns of Amphipolis and Apollonia (see on Acts 17:1). Knowing that he must reach the Jews at Thessalonica first, if at all, Paul went to the synagogue on three successive Sabbaths and presented the great truths of the gospel to his fellow countrymen. His recent disgraceful treatment at Philippi had not intimidated him, and in the power of the Holy Spirit he presented the Messianic prophecies of the OT, and showed their fulfillment in Jesus.
Some of his Jewish hearers believed (Acts 17:4). Many more of the “devout Greeks” (see on Acts 17:4) accepted his message. Among the believers at Thessalonica there were also “of the chief women not a few” (Acts 17:4).
It seems probable that the missionaries continued their work for more than the three weeks here indicated, for Paul tells of having worked night and day to support himself while he preached the gospel to them (see 1 Thess. 2:9), and in his letter to the Philippians he refers to the gifts they sent while he was at Thessalonica (see on Phil. 4:16). His successful ministry soon aroused the fierce opposition of the Jews, which fomented strife and caused Paul to leave the city (Acts 17:5, 6). After the initial three Sabbaths spent in the synagogue, it seems that Paul continued his preaching in the house of Jason (Acts 17:7). He appears to have been particularly successful with the Greeks, for the church at Thessalonica seems to have been largely Gentile in composition (see on 1 Thess. 1:9; 4:5).
Mob violence, stirred up by the Jews, brought Paul’s preaching to the attention of the Roman authorities, but the charge that the apostle was guilty of treason in presenting the doctrine of Christ’s coming kingdom was not accepted by the magistrates. That Paul and his companions were not officially expelled from Thessalonica and debarred from returning, is evident from the fact that the apostle found it necessary to explain to the church why he had not returned (ch. 2:17, 18), and from the fact that Timothy did return (ch. 3:2). However, the Christians there seem to have thought it best for Paul and his associates to leave the city temporarily. The evangelists made their way to Berea, a city some distance to the southwest. Here again Paul preached in the synagogue, and among these Scripture-loving Jews he had much greater success. The news of his fresh activity soon reached the Jews of Thessalonica and spurred them to immediate action. They hastened to Berea and again stirred up the rabble against the missionaries (Acts 17:10- 13). Paul was sent away to Athens by friends, but his companions remained in Macedonia. The apostle was most anxious for their help in Athens, and awaited them there (Acts 17:16). Timothy seems later to have joined him at Athens, and was then sent back by Paul to Thessalonica to encourage the new believers and bring back word of their condition (see 1 Thess. 3:1, 2, 6). It appears that Silas remained in Macedonia, for when Timothy returned to Greece, Silas accompanied him, and the both joined Paul at Corinth, a short stay in Athens (Acts 18:1, 5).
Upon receiving Timothy’s report the apostle wrote his first letter to the Thessalonians. Manuscripts going back to the 5th century state at the end of this epistle that it was written from Athens. This supposition is probably drawn from ch. 3:1, 2.
However, from ch. 3:6 it seems clear that 1 Thessalonians was not written until after Timothy’s return from Macedonia, and according to Acts 18:1, 5, Paul was then at Corinth. Consequently it seems best to conclude that 1 Thessalonians was written there. This epistle is generally considered to be the first of Paul’s letters that has been preserved (see Vol. VI, p. 102), and, with the possible exception of the epistle of James, it was probably the first book of the New Testament to be written. For a discussion of the date of 1 Thessalonians see Vol. VI, p. 103.

4. Theme.
A radiant glow of ardent love permeates this epistle (cf. chs. 1:2-4; 2:7, 8; 3:6, 7). The apostle is most thankful for Timothy’s report of the faithfulness of the Thessalonians and of their tender regard for him. He hastens to commend them for their noble qualities of faith, love, and hope. He is most anxious to visit them, for he had not had sufficient time while he was with them to instruct them fully in the truths of the gospel.
Certain problems, too, must have been reported by Timothy. Some at Thessalonica were grieving over loved ones who had died since receiving the gospel message, fearing that these loved ones could have no part in the glorious resurrection at the Lord’s return. Some were fanatical in regard to the second advent, holding that they should not work, but await the Lord’s coming in idle expectancy. Some were slipping back into the world, and were in danger of being lost in immorality. Others were inclined to independence, not willing to recognize the duly appointed leaders of the church. The “unruly,” the “feebleminded,” and the “weak” all needed help (ch. 5:14). Had it been possible, the apostle would have hastened to give personal instruction to these beloved believers. More than once he tried to return, but Satan hindered him (ch. 2:18), and on this account he had to content himself by writing the church a letter.
The theme of the resultant epistle is practical godliness in view of Christ’s return. The glorious advent of the Lord is the most prominent doctrine presented (chs. 1:10; 2:19; 3:13; 4:13-18; 5:23). Other doctrines mentioned are the death and resurrection of Christ (ch. 4:14), the resurrection of the righteous dead (vs. 13-16), future rewards and punishments (chs. 4:17; 5:3), the personal existence and active working of Satan (ch. 2:18), the doctrine of redemption, including election and sanctification (chs. 1:4; 4:3-7).