Paul’s Letters to the Corinthian Church 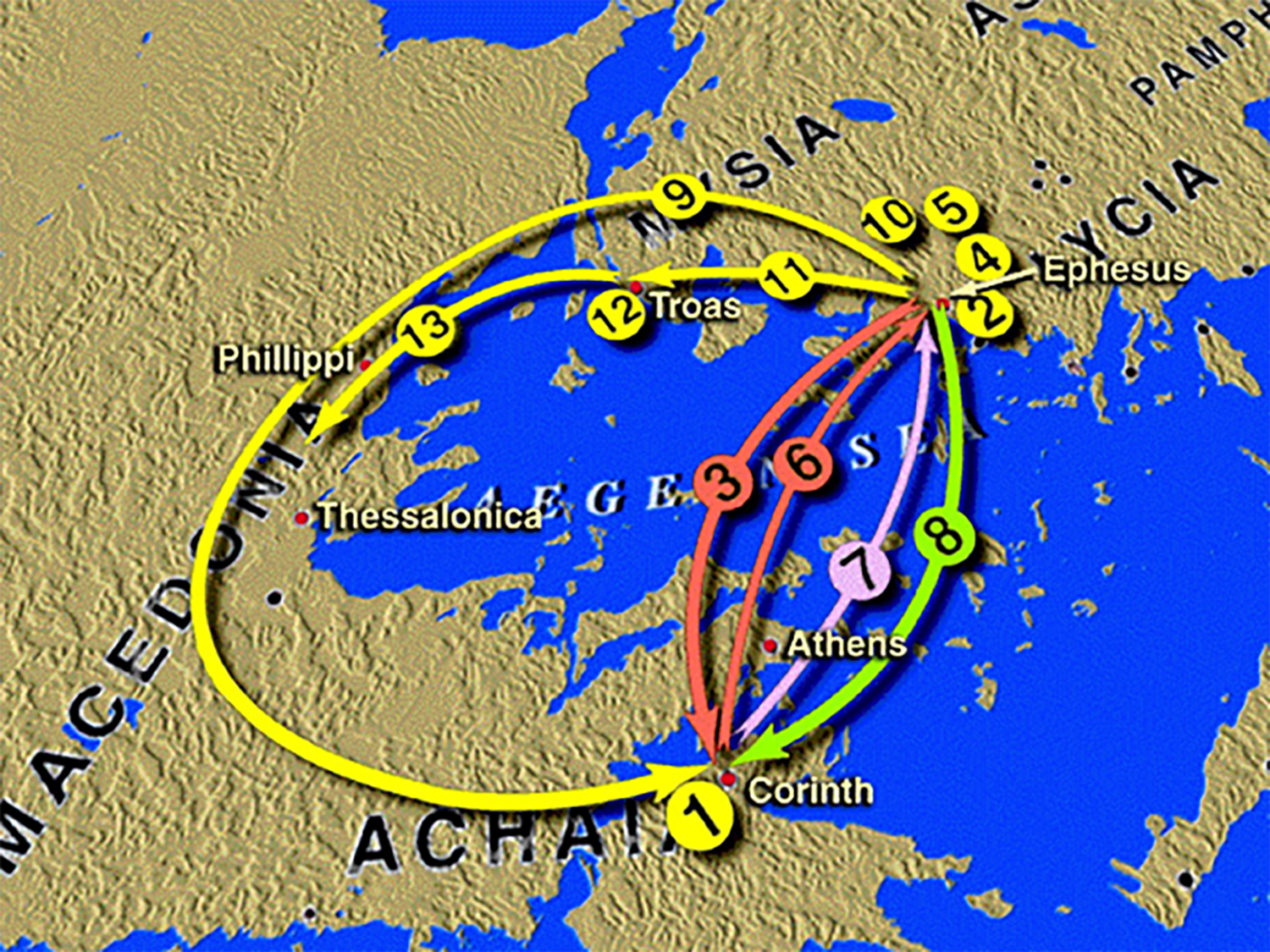 1. Title.
Textual evidence attests (cf. p. 10) the title Pros Korinthious A, literally, “To the Corinthians A [or “I”]”. This shorter title is found in the manuscript on Corinthians in the Chester Beatty Biblical Papyri (see Vol. V, p. 116), the oldest extant manuscript of the epistle, written about the 3d century A.D. The title was not a part of the original document.

2. Authorship.
Except for some ultraradical critics who go so far as to question whether Paul ever existed, the Pauline authorship of the epistle has been generally accepted. In fact it, along with 2 Corinthians, Romans, and Galatians, is believed to be the best attested of all of Paul’s letters. The name of the author appears at both the beginning and the end of this epistle (1 Cor. 1:1, 2; 16:21). The letter was dictated to an amanuensis, or secretary, with the exception of the salutation at the close of the book, which Paul states he wrote with his “own hand” (ch. 16:21). The exact reason for his use of secretaries is not known, but it appears to have been customary with him (see Rom. 16:22; Col. 4:18; 2 Thess. 3:17). One suggestion is that the apostle had poor eyesight (see on Gal. 6:11).

3. Historical Setting.
First Corinthians was written from Ephesus (1 Cor. 16:8). This city was the scene of Paul’s labors for “three years” (Acts 20:31) and the chief center of his activities during his Third Missionary Journey (Acts 19; 20:1). He was about to depart for Greece and Macedonia when the letter was written, but hoped to remain at Ephesus “until Pentecost” (1 Cor. 16:5-8). However, circumstances hastened his departure (Acts 19:21 to 20:3). These observations enable us to date the letter in the spring of A.D. 57 (see p. 103).
The church at Corinth was established during Paul’s Second Missionary Journey. The apostle had spent at least 18 months in that center. His work had been arduous but successful, and a thriving church was established (Acts 18:1-11).
The ancient city of Corinth was situated on the isthmus connecting the Peloponnesus with the mainland of Greece. It was at the southern end of the isthmus, on a low plateau at the northern foot of the mountain known as Acro-Corinthus, on the summit of which stood a citadel and a temple. The city was thus strategically placed, with the overland traffic between the Peloponnesus and Attica passing through the town. Its convenient location between the Saronic Gulf on the east and the Gulf of Corinth on the west of the isthmus made it a market for much of the commerce that flowed from Asia to Europe, and vice versa. Some Phoenicians settled in the city and carried on their trade of making purple dye from the Murex trunculus of the neighboring seas. They also introduced other arts, and set up the impure worship of the Phoenician deities.
An important mercantile city, and situated at the passage of the seas, Corinth was cursed with licentiousness to such an extent that the very name of the city became a byword for sensuality. The expression “to Corinthianize” signified luxurious profligacy.
An understanding of the religion of Corinth serves to highlight the wonderful grace of God in overcoming the forces of evil and in planting a church of regenerated saints in this notorious city. By its wealth, luxury, trade, and mixed population, Corinth well merited the title given to it by Barnes, “the Paris of antiquity”. The principal deity was Aphrodite, the goddess of love in its lowest form, licentious passion, and it is not hard to imagine the effect of this deification of sensuality. The temple of Apollo was built on the north slope of the Acro-Corinthus. According to legal requirement 1,000 beautiful young women officiated as courtesans, or public prostitutes, before the altar of the goddess of love. They were supported chiefly by foreigners, and from the proceeds of their vice the city derived a steady income.
The task confronting the messenger of the gospel in the ancient city of Corinth is well set forth in these words: “If the Gospel could triumph in Corinth, it can win under any circumstances” (W. D. Chamberlain).
During Paul’s absence since the founding of the church some three years before (see p. 100), numerous problems had arisen that demanded the apostle’s attention. We learn of these from the epistle itself. First of all, factions had disrupted the church. Because of his eloquence and learning, Apollos was exalted above Paul by many in the church (see 1 Cor. 1:12; 3:4; cf. Acts 18:24 to 19:1). Others boasted that they were followers of neither
Paul nor Apollos, but of Peter, one of the original apostles (1 Cor. 1:12). Still others disclaimed adherence to any human leader and professed to be followers of Christ (ch. 1:12).
Furthermore, living as did the members of the Corinthian church in the midst of the profligate people of Corinth, many who had renounced their wicked ways slipped back into their old habits of life (ch. 5). Further, disrepute had come upon the church by Christians settling their quarrels in the secular courts. The Lord’s Supper had been made an occasion for feasting (ch. 11:17-34). Questions had also arisen regarding marriage and related social problems (ch. 7), the eating of foods sacrificed to idols (ch. 8), the proper conduct of women in public worship (ch. 11:2-16). There was misunderstanding also regarding the proper function of spiritual gifts (chs. 12-14). Some were skeptical regarding the fact and manner of the resurrection (ch. 15).
Paul received information regarding the state of the Corinthian church from Apollos, who, when factions arose in the church, had left the scene (see AA 280). Apollos was with Paul at Ephesus. Paul urged him to return to Corinth, but without success (see on 1 Cor. 1:12). Other information came from “them which are of the house of Chloe” (ch. 1:11) and from what was probably a delegation, consisting of Stephanas, Fortunatus, and Achaicus (ch. 16:17). The situation was such as to cause Paul serious apprehension. He had already written a letter to the church (see on ch. 5:9), and there is the possibility that he had briefly visited Corinth during his stay at Ephesus (see on 2 Cor. 13:1). He had also sent Timothy (1 Cor. 4:17; cf. ch. 16:10) and Titus to Corinth (see on 2 Cor. 2:13). In addition, he composed the letter now known as 1 Corinthians, in which he dealt with the various problems that had arisen.

The main burden of this epistle is twofold: first, reproof for the backsliding, which had resulted in the introduction into the church of practices that corrupted the teachings of the gospel; and second, instruction, or explanation, regarding the points of belief and practice concerning which the believers had sought for clarification. Paul did not condone or show indulgence to sin. He was impartial in his condemnation, and did not seek to flatter any or to cloak transgression in any way. He firmly and severely denounced departures from the path of rectitude. Along with the exposure of the disorders, and rebuke for the growing irregularities in the church, there is seen the compassionate pity and tender mercy that is always found in the heart of true co- laborers with Christ, a love that ever seeks to lift up the fallen, restore the wandering one, and bind up the wounded soul. Paul knew that love, not force and harshness, is the converting, heart-conquering power, therefore his spiritual surgery upon the church at Corinth was followed by the soothing balm of gentle love. This is particularly seen in the masterly exposition of Christian love found in ch. 13. From the standpoint of instruction the epistle deals with several practical matters, such as marriage, the use of food offered to idols, behavior in church services, the Lord’s Supper, and the proper exercise of spiritual gifts.
The book has been described as “one of the richest, most instructive, most powerful” of all Paul’s letters (AA 301).