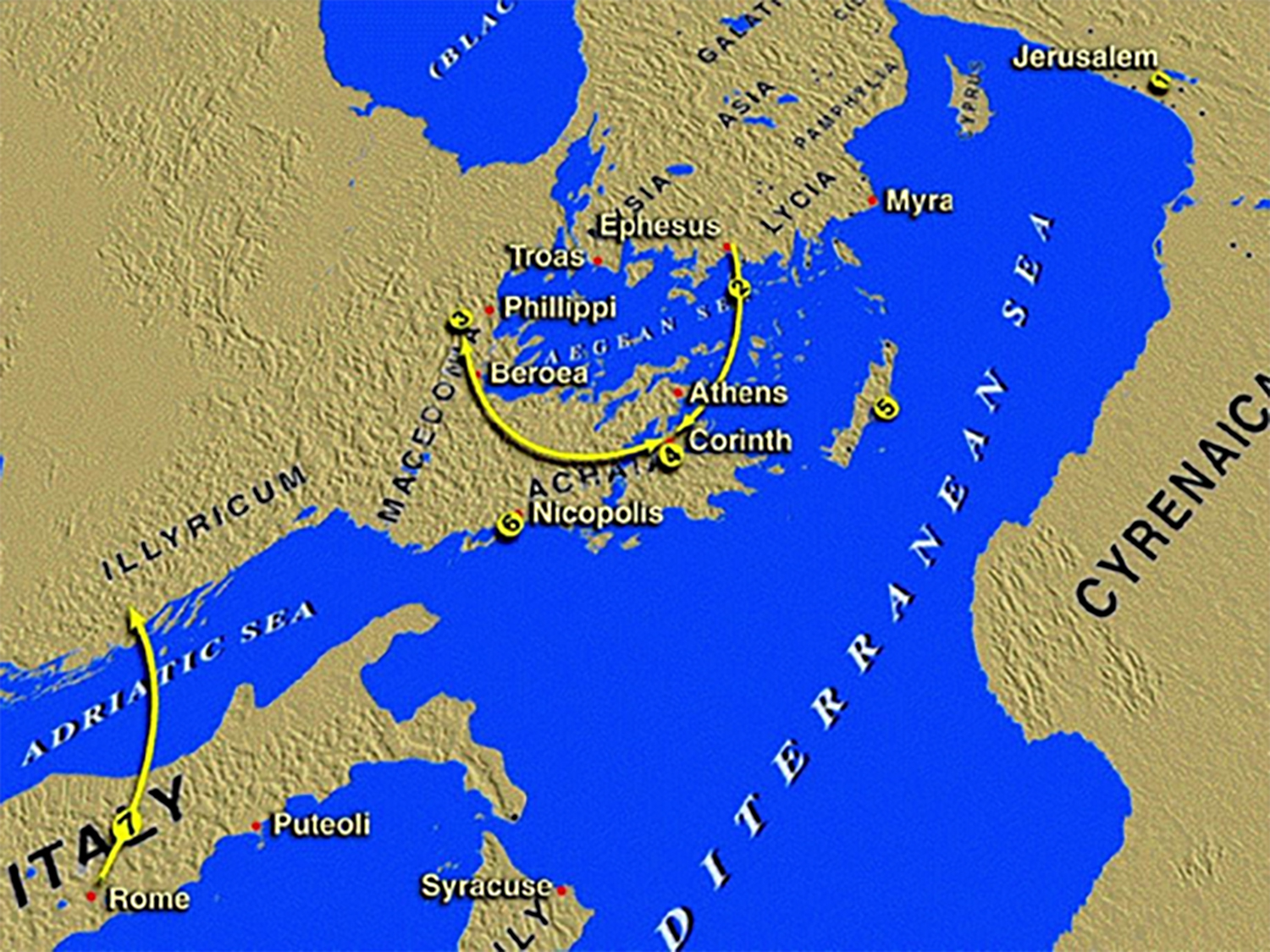 1. Title.
In the oldest Greek manuscript known today the title of this epistle is simply Pros Titon (“To Titus”). Doubtless, since Paul’s original autograph was a personal letter, it contained no formal title.

2. Authorship.
As with the other pastoral epistles, modern critical scholarship, generally, questions the claim of this epistle that Paul was its author (ch. 1:1), which claim this commentary accepts without question. For a consideration of the problems involved see Vol. V, pp. 183, 184. Concerning the time and circumstances of writing see Vol. VI, p. 107.

3. Historical Setting.
This epistle was addressed to Titus at a time when he was engaged in ministry to the Christians of Crete. This large island in the Mediterranean is 160 mi. (258 km.) long and from 7 to 35 mi. (11 to 56 km.) wide. Its total area is 3, 199 square mi. (8,285 km.). The narrow but fertile coastal plain on the northern side rises rapidly into a coastal range, beyond which a second range rises still higher, and behind that a third. The highest of these mountains is Mt. Psiloriti (elevation 8,065 ft. or 2,458 m.). This is the ancient Mt. Ida, where, according to an ancient Grecian legend, the pagan god Zeus was born.
In the 2d millennium B.C., Crete was the center of a civilization—the Minoan—that rivaled the civilizations of Mesopotamia and Egypt. There the semilegendary King Minos, it was said, kept in an intricate labyrinth a bull-monster that devoured captive Greek youths. This Minotaur myth may well be accounted for by the labyrinthine ruins of the Minoan palace at Cnossus and the pictures of young acrobats engaged in the perilous feat of leaping over the horns and backs of bulls. Before 1400 B.C. Minoan Crete had a powerful fleet, a far-flung commercial empire, and a highly sophisticated civilization (with an advanced art and three systems of writing) that spread into southern Greece, centered at Mycenae. Its trade with Egypt and Syria, evidenced by artifacts, made it a channel of communication between the East and Europe. The Philistines had lived on Crete before migrating to Palestine (see Vol. II, pp. 33, 34; Vol. III, p. 131).
Eventually it was colonized by the Greeks and played an important, though inconspicuous, role during some of the more glorious epochs of Hellenic history. In the earliest years of Christianity the Cretans were distinguished by a well-known reputation for dishonesty and untrustworthiness (cf. Titus 1:12). The island seems to have served as a headquarters for pirates in the 1st century B.C., but these were subdued, and in 67 B.C. it became part of the Roman Empire; however, Cretans continued to serve as mercenaries in foreign armies.
Not much is known of Titus. Personal references in the epistle are sketchy, and he is not mentioned in the Acts. The earliest allusion to him appears in Gal. 2:1-3, where Paul speaks of Titus accompanying him from Antioch when he attended the Jerusalem Council. There, as an uncircumcised convert from paganism, he became a test case as touching the question of the circumcision of Gentiles. After a time he represented Paul at Corinth (2 Cor. 8:16, 17; 12:17, 18), where he dealt successfully with the difficulties discussed so frankly in 2 Cor. 2; 7. He also organized collections for the saints at Jerusalem (2 Cor. 8:6-10). Paul considered him a reliable confidant and a trustworthy soldier of the cross (2 Cor. 12:18), and refers to him as brother, fellow helper, and partner in labor (2 Cor. 2:13; 8:23). In this epistle he speaks of Titus as a son in the faith (ch. 1:4). Titus is last mentioned in the NT as having gone to Dalmitia, the modern
Yugoslavia (2 Tim. 4:10). Eusebius, the church historian of the 4th century, refers to Titus as the bishop of the island of Crete (Eusebius Ecclesiastical History iii. 4).

4. Theme.
Aside from the fact that Paul had left Titus on the island of Crete (Titus 1:5), the exact circumstances under which this epistle was written cannot be reconstructed. Paul seems to have been traveling in company with Zenas, Apollos, Artemas, and Tychicus (ch. 3:12-15). Apparently Zenas and Apollos were about to set forth on a journey that would take them past Crete, and Paul therefore asked them to carry this epistle to Titus, who was to join Paul for the winter at Nicopolis. It is thought that the epistle to Titus was written between Paul’s first and second imprisonments at Rome, about the year A.D. 65 (see Vol. VI, p. 107).
From the epistle it appears that there were groups of Christians in a number of places in Crete. The general church organization, however, was incomplete, and trouble was brewing because of false teachers, who may have been half-converted Jews. These false teachers were laying great emphasis on myths, genealogies, and the law. They were wasting much time and energy, both their own and that of other church members, on pointless argument. Titus was responsible for straightening matters out, and Paul sends him counsel and encouragement. In this letter Paul is especially concerned with giving Titus counsel that would help him to establish the recently converted Christians of Crete in true Christian faith and living. Accordingly, the epistle is highly practical. Paul counsels a more thorough and formal church organization, and advises Titus as to qualifications for church elders. He reminds him of the Cretans’ reputation for falsehood and laziness, and implies that the Christians there had been disturbed by Jewish legalists. Paul particularly points out that emphasis on ceremonial impurity in time tends to render the conscience itself impure. When the mind is absorbed with religious trivia, too often the really important questions of morality and integrity are ignored and religion deteriorates into a matter of form and theory.
Paul’s great emphasis here is that the Cretan Christians should be sober, chaste, and thoroughly upright in all their living. Slaves—as doubtless many of them were—just like anyone else, should be obedient and honest.
At the climax of his letter Paul reminds Titus, and the Cretans through him, that God’s kindness to man is not won by good deeds, but is the gift of His mercy through Jesus Christ.
An awareness of the pagan heritage of these Cretan brethren and of the mental confusion wrought by the Judaizing teachers helped Paul to deal specifically with their problems. His counsel is clear and specific. He understands his people and their basic human behavior patterns. In this letter he exhibits a precision and incisiveness that preachers today may well seek to emulate.