The Ministry of Jonah About the Time of Jeroboam II 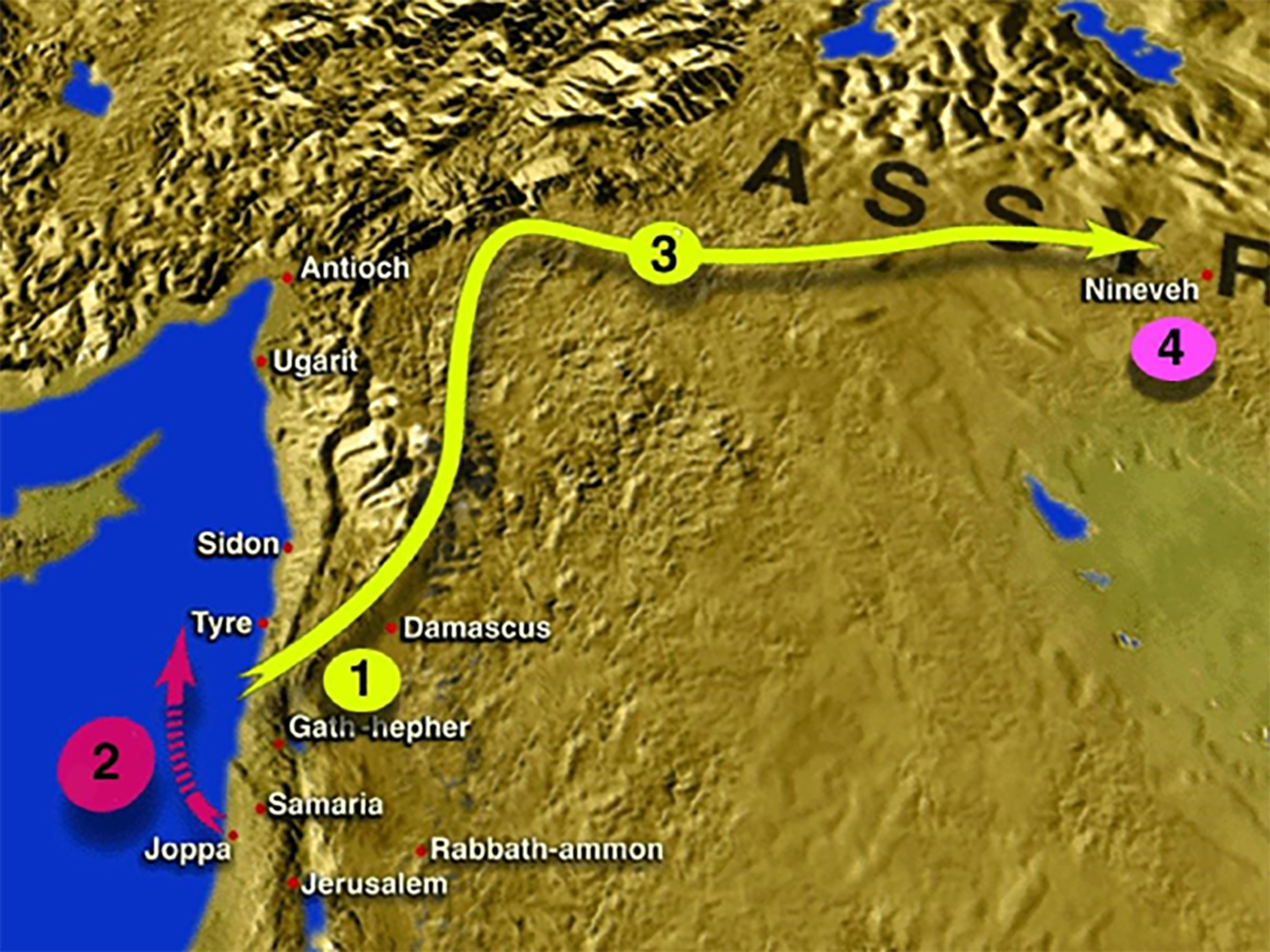 2. Authorship.
Although the book itself nowhere states that Jonah was the author, the traditional view has been that he was. Many modern scholars have favored a postexilic authorship though not necessarily denying the historicity of Jonah. However, the arguments they advance, such as the presence of Aramaisms, are inconclusive. The study of Ugaritic has demonstrated the antiquity of many forms and words that were formerly held to belong to a much later date (see on Ps. 2:12; see Vol. III, pp. 618, 619). The use of the third person is likewise an insufficient argument, inasmuch as not a few ancient writers, such as Xenophon, Caesar, and others employed this method. Bible writers, too, at times used this method (Isa. 7:3; 20:2; Jer. 20:1, 3; 26:7; Dan. 1:6-11, 17, 19, 21; Dan. 2:14-20; etc.; see on Ezra 7:28).
Jonah is identified as a native of Gath-hepher (2 Kings 14:25) who predicted prosperity for the nation of Israel. The prosperity was realized in the days of Jeroboam II (approximately 793-753 B.C.; see Vol. II, p. 83); so the prophecies must have been delivered either before or shortly after the beginning of Jeroboam II’s reign. Gath-hepher was on the Zebulun border about 23/4 mi. (4.4 km.) north by east from Nazareth. It is Khirbet ez-Zurrâ‘. A nearby tomb, claimed to be that of Jonah, is now exhibited. Nothing further is known concerning Jonah than what is revealed in this brief historical mention in 2 Kings, and in the book itself. Nor is anything known concerning his father, Amittai.

3. Historical Setting.
The period in which Jonah prophesied was one of great national distress (2 Kings 14:26, 27). The kings who sat on Israel’s throne all did evil in the sight of the Lord, and national judgment was approaching. Through Jonah the Lord predicted a return of national strength. It appears that the alleviation that followed was designed to be an inducement to the nation to return to God. The prosperity was a demonstration of what the nation might attain to under the blessing of the God of heaven. However, in spite of divine blessing Jeroboam “did that which was evil in the sight of the Lord” (2 Kings 14:24), as did his successors.
The kings in Assyria during the reign of Jeroboam II, according to the chronology employed in this commentary, were Adad-nirari III (810-782), Shalmaneser IV (782- 772), Ashur-dan III (772-754), and Ashur-nirari V (754-746). There is evidence that possibly indicates that during the reign of Adad-nirari III a religious revolution occurred. Nabu (Nebo), the god of Borsippa, appears to have been proclaimed sole, or at least principal, god. Some see a possible connection between this monotheistic revolution and the mission of Jonah to Nineveh (see Vol. II, p. 60).

4. Theme.
The book of Jonah is the only one of the twelve so-called Minor Prophets that is strictly narrative in form. It is an account of Jonah’s mission to the city of Nineveh to announce its speedy destruction because of its sins. The prophet entertains misgivings and perplexities as to his carrying out the charge of God to go to Nineveh. The very thought of journeying to this great metropolis, the difficulties and seeming impossibilities of the task, made him shrink from undertaking the divine commission and question its wisdom. Failing to rise to that strong faith that should have led him to realize that with the divine command came the divine power to accomplish it, Jonah sank into discouragement, dread, and despair (see PK 266). Knowing the loving-kindness and long- suffering of God. Jonah was also afraid that if he delivered the divine message and the heathen accepted it, the threatening doom he pronounced upon them would not come to pass. This would be a deep humiliation to him, as it thus turned out to be, and this he could not endure (ch. 4:1, 2). He at first disobeyed, but through a series of events was led to carry out the commission. The inhabitants of Nineveh repented, and for a time turned from their sins. Jonah was angry, but God justified His gracious dealings.
Among the lessons taught by Jonah’s prophecy is the truth that God’s grace brings salvation to all (Titus 2:11), that it was indeed not confined to the Jews, but was also to be revealed among the heathen. God has “also to the Gentiles granted repentance unto life” (Acts 11:18). Like Peter (Acts 10), Jonah came to realize reluctantly that God was willing to receive those of every nation who turned to Him. By referring to “the men of Nineveh” who responded to Jonah’s call to repentance, Jesus condemned the pharisaical and prideful Jews of His day (see Matt. 12:41; Luke 11:32) and all others who, in their religious complacency and false sense of soul security, deceive themselves into thinking that they are the favored people of God, and thus assured of salvation.
Jesus used the experience of Jonah in the sea as an illustration of His death and resurrection (Matt. 12:39, 40). His reference to the book of Jonah establishes the veracity of the book.
Expositors of the book of Jonah have followed two main lines of interpretation:
(1) the historical, and
(2) the allegorical.
The second method has been adopted by those who deny the possibility of the miraculous elements in the book. They term the book variously a legend, a myth, a parable, or an allegory. For one who believes in miracles the second method of interpretation is both unnecessary and pointless.
In favor of the historical view the following arguments have been presented:
1. The narrative leaves one with the impression that it is historical. There is no indication that the author intended it to be otherwise regarded.
2. Jonah was a historical character (2 Kings 14:25).
3. The Jews regarded the book as historical (Josephus Antiquities ix. 10. 1, 2).
4. The conversion of the Ninevites is plausible. See p. 996 for a possible historical synchronization with a religious revolution in Assyria.
5. The information as to the size of Nineveh can be harmonized with known historical facts (see Additional Note on Chapter 1).
6. The references of Jesus to the book (Matt. 12:39, 40; Luke 11:29, 30) show that our Lord regarded it as historical.
This commentary adopts the historical view.

III. Jonah’s Preaching and the Repentance of the Ninevites, 3:1-10.