The Ministry of Isaiah Under Pekah of Israel and Ahaz of Judah, About 734 B.C. 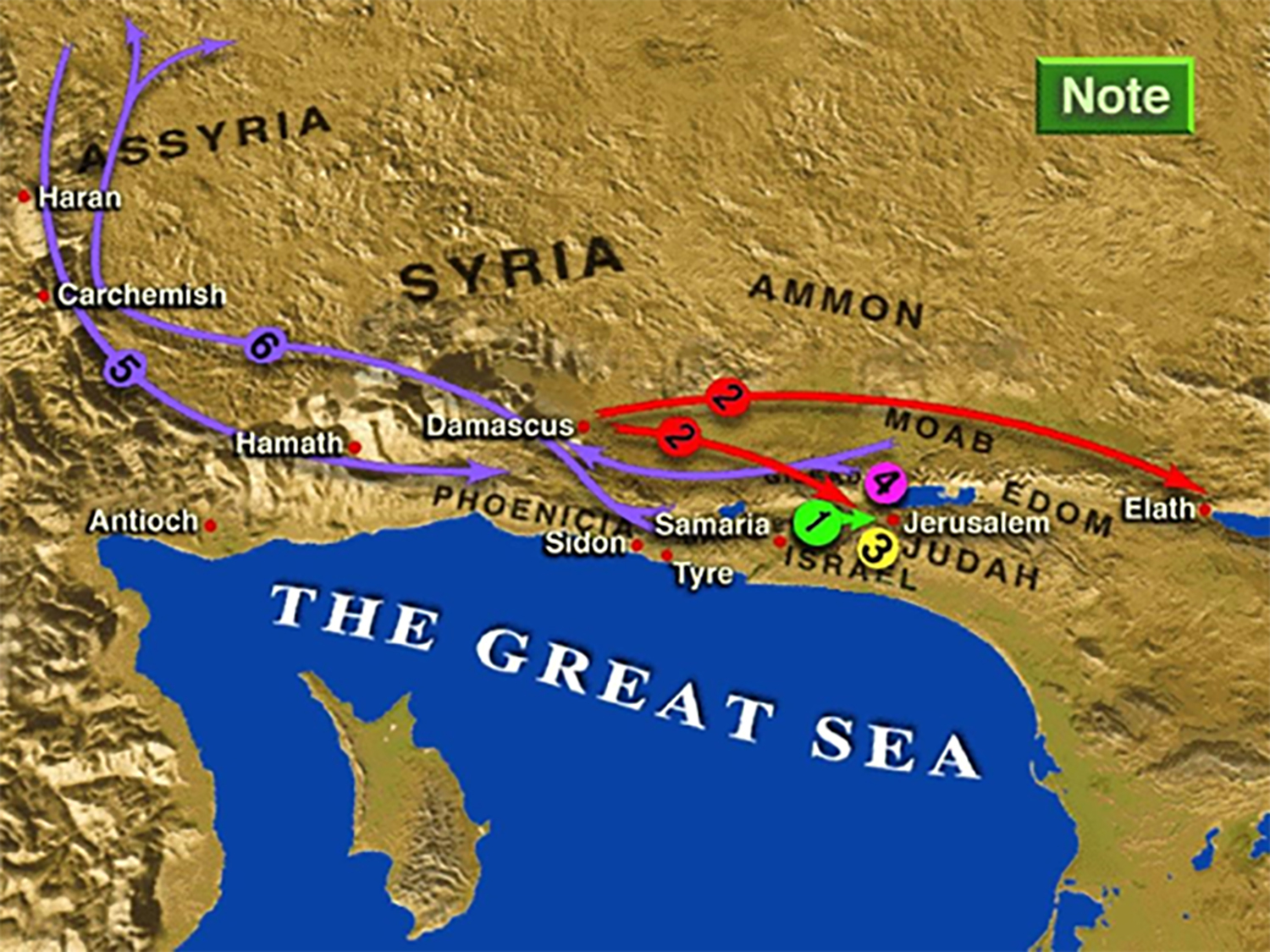 1. Title.
The title of the book of Isaiah in Hebrew manuscripts and in the LXX is “Isaiah.” In Luke 4:17 the book is called “the book of the prophet Esaias,” and in Acts 8:30, “the prophet Esaias.” In Hebrew Bibles the book is found in the section called “Prophets,” immediately preceded by the combined book of Kings and followed by Jeremiah, Ezekiel, and “The Twelve.” See Vol. I, p. 37.


The commentator on Isaiah is now in the fortunate position of having at his disposal two Hebrew manuscripts of this Old Testament book older by a thousand years than any other Hebrew Bible manuscripts previously known. These priceless documents, known as the Dead Sea scrolls of Isaiah, call, therefore, for special attention. The discovery, general characteristics, and importance of these and other Hebrew scrolls found in caves near the Dead Sea since 1947 have been described briefly In Vol. I, pp. 31-34, and need not be repeated here.
Of the two Isaiah scrolls found in the first cave near Khirbet Qumrân, the one containing the complete book (sold first to the Syrian monastery in Jerusalem) is designated 1QIs; the incomplete scroll (sold to the Hebrew University) is called 1QIs. Both are now in the Shrine of the Book in Jerusalem. Both, part of an Essene community’s library, were stored in the cave before the end of the Jewish war (A.D.), as shown by professional excavation of the cave and of Khirbet Qumran̂ . Both apparently date from the 2d or 1st century B.C.; 1QIs seems to be older than 1QIs. They are here described briefly since their more important variations from the Masoretic text are noted in the comments on the verses involved.
1QIs, the complete book, was published in facsimile and in modern Hebrew letters by Millar Burrows (The Dead Sea Scrolls of St. Mark’s Monastery, vol. 1 [New Haven: American Schools of Oriental Research, 1950]), and resulted in many learned studies. On the whole this first Isaiah scroll shows great agreement with the long-familiar Masoretic text. However, the scribe of 1QIs was not a professional and his handwriting is less beautiful than that of 1QIs. He made many scribal errors. The impression is gained that some of his errors are due to mistaken hearing, since some sections seem to have been written from dictation. There is also evidence that the copy used as a prototype had certain lacunae, or gaps. Accordingly, when the scribe came to a missing passage he left a blank space in his copy and later copied in the missing section from another, and perhaps more perfect, copy. Sometimes the scribe underestimated the amount of missing matter, and the space he left for it proved insufficient. The result was that the inserted sections often ran over into the margin.
A few omissions from the text are noticeable where the eye of the scribe, or the dictator, skipped from a certain word to the same word a little farther on and missed all words between. This very common scribal error, frequent also in New Testament manuscripts, is called homoeoteleuton. Additions to the text are very few and short— never exceeding a few words. There are many textual variations, but most of these are of a minor nature and most of them do not affect the meaning of the text. There are thousands of orthographic variations (differences in spelling), as might be expected in a manuscript a thousand years older than the next oldest Hebrew manuscript of the same book.
1QIs is much less complete than the other Isaiah manuscript, 1QIs. When Prof. E. L. Sukenik of the Hebrew University in Jerusalem procured it from the dealers or discoverers, it was in bad condition. After it had been unrolled, it was found that the remnants of this scroll have preserved for us fragments of the following chapters of Isaiah 10; 13; 16; 19; 22; 26; 28-30; 35; 37-41; 43-66. The fragments containing text material up to chapter 37 are very small and therefore less informative than the last part of the book, which is reasonably well preserved, although every page shows large or small gaps in the leather, and therefore also in the text. The poor state of preservation of this scroll is especially lamentable, because what remains of it is far superior in quality to 1QIs.
Its script reveals that it is the product of an experienced scribe who had beautiful handwriting and who made hardly any scribal errors. Enough is preserved of this scroll to warrant the conclusion that the missing parts did not differ from those still extant, in their striking agreement with the Masoretic text. Throughout 1QIs only eight variations from the Masoretic text have been considered of sufficient importance to be given attention in this commentary, and even these are of relatively minor significance (see on chs. 38:13; 41:11; 43:6; 53:11; 60:19, 21; 63:5; 66:17). The other variations are even less so.
The preserved portions show so few variations from the Masoretic text that some critical scholars at first refused to believe in the antiquity of a scroll that showed textual peculiarities these scholars had believed to be of much later origin. This second Isaiah scroll thus reveals that the text has been transmitted to us practically unchanged since Christ’s time, while 1QIs exemplifies other contemporary, less-carefully-copied texts.
1QIs was edited by E. L. Sukenik and published posthumously by N. Avigad in The Dead Sea Scrolls of the Hebrew University (Jerusalem: Hebrew University, The Magnes Press, 1955).
From the Qumrân Cave 4 come fragments of 15 Isaiah MSS—14 written on leather, 1 on papyrus—only a few being yet (1976) published. See P. W. Skehan, Biblical Archaeologist 19 (1956), pp. 86, 87; Skehan, Revue Biblique 63 (1956), p. 59.
Qumrân Cave 5 produced one small Isaiah fragment (J. T. Milik, in Discoveries in the Judaean Desert, III: Les ‘Petites Grottes’ de Qumrân [Oxford, 1962], p. 173); and the caves at Murabba ‘ât one (2d century A.D.) containing parts of ch. 1:1-14 (ibid., II: Les Grottes de Murabba ‘ât [Oxford, 1961], pp. 79, 80).
Isaiah was apparently a very popular book at Qumrân, for more examples from it were found in the 11 caves there than from any other Bible book except Deuteronomy, of which there were two more examples than of Isaiah.

3. Historical Setting.
The book of Isaiah is definitely dated, and the period from which it comes is well known in Near Eastern history. Isaiah was called to his prophetic office prior to the time he was accorded the vision of divine glory recorded in ch. 6, and carried on his ministry during the reigns of Uzziah, Jotham, Ahaz, and Hezekiah (Isa. 1:1). According to the tentative chronology employed in this commentary (see Vol. II, pp. 77, 84, 86), Uzziah died about the year 739 and Hezekiah died in 686, succeeded by his son Manasseh. The kings of Assyria during this period were as follows: Tiglath- pileser III (745-727), Shalmaneser V (727-722), Sargon II (722-705), Sennacherib (705-681), and Esarhaddon (681-669). These kings were the most powerful rulers Assyria ever produced. Thus Isaiah did his work during the height of Assyrian supremacy, when it appeared that Assyria might soon gain complete control of the Eastern world. Tiglath-pileser III began a series of campaigns against the surrounding nations, as a result of which more and more of the Near East was brought under Assyrian control. Assyria came to be regarded as the great terror of the world, and no country appeared strong enough to withstand her might.
In 745 Tiglath-pileser invaded Babylonia, in 744 he marched against the northeast, and from 743 to 738 he engaged in tremendous campaigns against the northwest and west that brought him into conflict with Menahem of Israel and “Azriau from Iauda” (probably Azariah [Uzziah] of Judah). Azariah seems to have been the moving spirit in a major coalition of Western nations aimed at preventing Assyria from gaining control of the Mediterranean area. In 737 Tiglath-pileser’s campaign was again directed to the northeast, against the region of Media. But in 736 he was back once more in the northwest, where he engaged in a desperate five-year struggle to bring Western Asia completely under his control. In 735 his campaign was directed against Urartu, in the region of modern Armenia; in 734 he warred against Philistia, and in 733 and 732 against Damascus. In 731 he was once more in Babylonia, and in 730, according to the record, he remained at home. But in 729 he was again in Babylonia, where he “took the hands of Bel” and thereby became king of Babylon under the reigning title of Pulu (see Vol. II, p. 61). In 727 there was another campaign against Damascus. For further information on the reign of Tiglath-pileser, see Vol. II, pp. 60-62.
Although the records of Shalmaneser V (see Vol. II, p. 62) are very incomplete, it is known that his major campaign was against the nation of Israel. He besieged Samaria for three years, 725 to 723 inclusive, when the city was taken (723/722) and the nation of Israel disappeared forever.
Sargon II (see Vol. II, pp. 62, 63) may have been in command of the army that took Samaria in 723/722. He began to reign in 722/721 and became, perhaps, the greatest military monarch of Assyrian history. He engaged in a series of campaigns against the northeast, Babylonia, the northwest, and the Mediterranean coastlands. In 720 he put down uprisings in the northwest and west, and in 715 he subdued certain Arab tribes and received tribute from various obscure Egyptian rulers. In 711 he sent his tartan (see on 2 Kings 18:17) to put down an uprising in Ashdod (cf. Isa. 20:1). In 709 Sargon became king of Babylon.
Sennacherib (see Vol. II, pp. 63-65) began his reign in 705, and in 703 brought about the defeat of Merodach-baladan of Babylon. In 701 he embarked upon his famous “third campaign,” which took him against Phoenicia, Philistia, and Judah. Practically all Asiatic countries in the Mediterranean area, including Moab, Ammon, and Edom, were subdued and forced to pay tribute. The campaign, however, was not an unqualified success, owing to the fact that Jerusalem was not taken. Sennacherib evidently returned to the west in another campaign not mentioned in Assyrian records (see on 2 Kings 18:13), in which he again threatened Jerusalem, but was forced to return to Assyria after the annihilation of his army by an angel of the Lord (Isa. 37:36, 37).
Egypt and Babylon were comparatively weak during this period, but nevertheless exerted themselves at times against Assyrian aggression. Merodach-baladan of Babylon was particularly active during the reigns of Sargon and Sennacherib, and Taharka of Egypt led an army against Sennacherib during his second invasion of Judah (see on 2 Kings 18:13; 19:9).