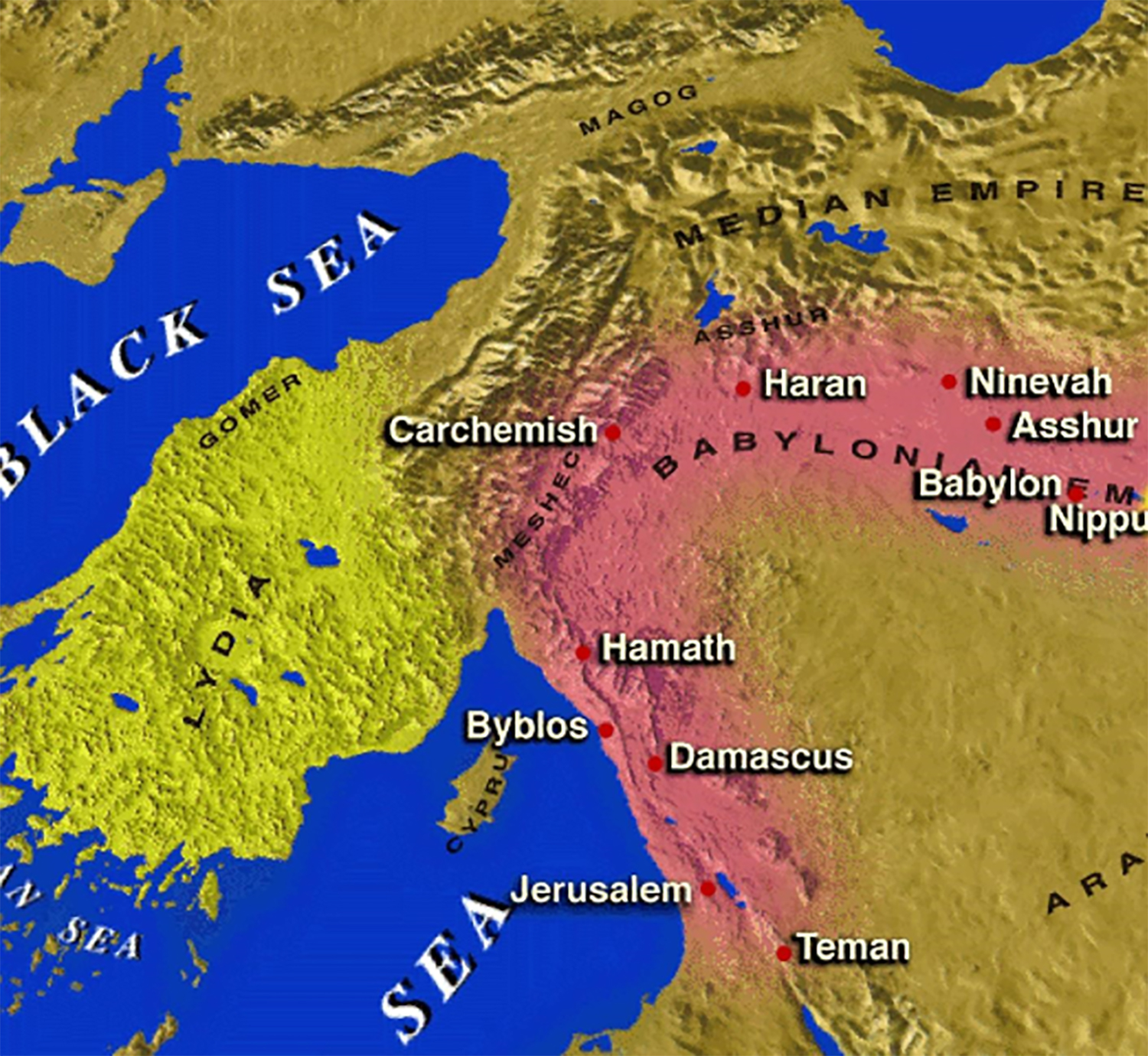 1. Title.
In the Hebrew the book is entitled with the name of its author, Yechezqe’l, signifying “whom God will strengthen.” This name, like that of many others of the saints of old, was singularly appropriate to its bearer’s life and work.
In the KJV, as well as in the Hebrew, the book is placed third among the writings of the four greater prophets. This is certainly its true chronological position, for it places the book between those of Ezekiel’s two great contemporaries. Of these Jeremiah began his prophecies long before, and Daniel continued his prophecies long afterward.

2. Authorship.
Until recent years the authenticity and canonicity of the book of Ezekiel have not been seriously assailed. However, conservative scholars as well as many of the more critical school still hold to the traditional position that Ezekiel himself was the author of the compilation of prophetic utterances that now bear his name.
Nothing is known concerning the personal history of the prophet except what may be gathered from the book itself and from the circumstances of the times in which the author lived. He is not mentioned in any other book of the OT, and his writings are never directly quoted in the New (except, perhaps, 2 Cor. 6:17), although there are many allusions to his imagery, especially in the book of Revelation. Outside the Bible he is mentioned only by Josephus (Antiquities x. 5. 1; 6. 3; 7. 2; 8. 2), and by Jesus son of Sirach (Ecclesiasticus 49:8), neither source contributing any detail of importance.
Ezekiel calls himself “the priest, the son of Buzi” (ch. 1:3). Of Buzi nothing is known. The fact that Ezekiel was included among “all the princes, and all the mighty men of valour” (2 Kings 24:14) who were taken away in Jehoiachin’s captivity (597 B.C.; see on Eze. 1:2), indicates that he was probably a member of Jerusalem’s aristocracy.
How old Ezekiel was when the doom of captivity fell upon him cannot be definitely known. Some suggest that the “thirtieth year” of ch. 1:1 may refer to the 30th year of his life. On this supposition he would have been 25 years old at the time of his exile. According to Josephus, the prophet was then a young man (Antiquities x. 6. 3). That he must have been at least comparatively youthful at the time is attested by the fact that one of his prophecies is dated 27 years later in 570, or 571 (see on ch. 29:17), and apparently he exercised his office for some time longer. See Chronological Table of the Prophecies of Ezekiel on p. 572.
Unlike Jeremiah, who remained unmarried (Jer. 16:2), Ezekiel had a wife whom he cherished as the desire of his eyes (Eze. 24:16). She died suddenly in the 9th year of the Captivity (ch. 24:1; see on ch. 1:2), and left the prophet to bear in solitude the great trials of his prophetic office.

3. Historical Setting.
Ezekiel began his prophecy in the 5th year of Jehoiachin’s captivity (ch. 1:2), 593/592 B.C. (see Vol. III, pp. 92-94). The northern kingdom of Israel had ceased to exist more than 100 years before, and the overthrow of Judah was rapidly approaching. The Babylonian servitude had already begun when, in the 3d year of Jehoiakim (605 B.C.), Nebuchadnezzar, king of Babylon, came against Jerusalem (Dan. 1:1). It is not known how many captives were taken at this time. Among them were some “of the king’s seed, and of the princes” (Dan. 1:3; cf. 2 Kings 24:1).
After 11 years of reign Jehoiakim came to an inglorious end and was succeeded by his son, Jehoiachin (597 B.C.; see on 2 Kings 24:1). After a reign of only three months he was carried as a captive, along with 10,000 of his chief people, including Ezekiel, to Babylon (2 Kings 24:12-16; Eze. 1:1, 2; 33:21).
Jehoiachin’s successor, Zedekiah, was no better than his predecessors. In his 11th year (586 B.C.) came the final overthrow of Judah (2 Kings 25:1-11). The remnant of the people were taken, the Temple burned, and Jerusalem destroyed. Only a few of the “poor of the land” were left to be vinedressers and husbandmen (2 Kings 25:12).
Such were the turbulent times in which Ezekiel, while yet a young man, was called to the prophetic office. The prospects were far from bright. The stroke of judgment that had already fallen on Jerusalem, instead of sobering the inhabitants of Judah, seemed only to plunge them deeper into apostasy and vice. Nor were the exiles on the river Chebar disposed to be “exercised” by the “chastening” (Heb. 12:11). They too continued rebellious and idolatrous (Eze. 2:3; 20:39), and showed little disposition toward thorough reform.

4. Theme.
The messages of the book of Ezekiel clarify the purpose of God for His people in the bitter experience of the Babylonian captivity. For centuries the prophets had counseled and warned Israel, yet the nation sank ever deeper into apostasy. Eventually, it became evident that the chosen people would never attain to God’s objectives for them as a nation (see pp. 26-30) unless drastic means were used to teach them lessons of obedience to, and cooperation with, God. Accordingly, He permitted them to learn in adversity lessons they had refused to learn during times of prosperity (see p. 31).
Strange to say, it was the leaders of Israel who, by precept and example, led the nation into apostasy (see Isa. 3:12; 9:16; Eze. 34:2-19). At first, apparently, God purposed that only the leaders should be carried into captivity (see Dan. 1:3, 4). The vast majority of the people were to remain in Judea, awaiting there the return of a chastened group of leaders to guide them in the way of God’s choosing. Had the Jews been willing to submit to Nebuchadnezzar, as God intended (see Jer. 27:1-22), the city of Jerusalem and its magnificent Temple would have remained intact (see Jer. 17:25, 27; 38:17), and the century of delay, difficulty, and discouragement that confronted the exiles upon their return from Babylon would have been avoided. But Israel’s stubborn resistance (see Jer. 28:1-14) made their cup of suffering progressively more bitter and brought on a second and then a third deportation (597 and 586 B.C. respectively). “Yokes of wood” were replaced with “yokes of iron” (Jer. 28:13, 14).
But even in captivity divine justice was seasoned with mercy. God came to His people as a teacher, to impress upon them the folly of disobedience and the desirability of cooperating with Him, rather than as a stern judge to punish them. The bitter experiences of the Captivity were not so much retributive in nature as they were remedial. The prophets Jeremiah, Ezekiel, and Daniel were commissioned to reveal Heaven’s purpose to men and to elicit cooperation with it. Jeremiah was sent to the Jews who remained in Judea, while Ezekiel carried out a similar mission for those who had already gone into captivity. Daniel was Heaven’s ambassador to the court of Nebuchadnezzar, to make known to him the divine will and to secure his cooperation. The fires of suffering were to burn no hotter than necessary to remove the dross. For a detailed consideration of the role of Daniel in relation to the Captivity, see Introduction to Daniel. For a consideration of the over-all divine purpose for Israel during the Captivity see pp. 29-32; cf. on Dan. 4:17.
The book of Ezekiel consists of two distinct parts. The first, chs. 1:1-33:20 to 33:20, records messages borne by Ezekiel to the captives by the river Chebar, near Babylon, mostly prior to the fall of Jerusalem in 586 B.C. The second, chs. 33:21 to 48:35, anticipates, and was designed to inspire hope in, the restoration from captivity. It was God’s intent, through Ezekiel, to make a powerful appeal to the Israel of the Captivity to accept at long last the divine destiny for them. The occasion for such an appeal was particularly appropriate in the light of new historical developments. The plan of the book displays the characteristic gospel style. A number of the messages are devoted to an exposure of the sins of the people. The object is twofold: first, to lead the people into a genuine experience of repentance, and second, to reveal the need of divine aid for future obedience promised in the new covenant. Through ignorance on the one hand, and perverted instruction by corrupt priests, false prophets, and apostate leaders on the other, the Israelites possessed a greatly distorted picture of the character of God and of God’s plan for His people. This erroneous impression Ezekiel sought to correct. He hoped that a new concept of God would be the motivating force to accomplish the needed reform and to impel the people to accept their high destiny. He importuned them to accept the Exile and to abandon their false hope in the ability of Jerusalem to withstand capture. He pleaded with them to permit the Captivity to have its salutary effect upon them. He crowned his appeal with repeated and detailed pictures of the future glory that would ensue upon an acceptance of the conditions. How different the history of Israel would have been had she heeded the impassioned pleas of the seer!

5. Outline.
The prophecies of Ezekiel are set down according to a well-considered plan. They fall naturally into two main divisions: the first 33 chapters representing prophecies delivered, at least mainly, prior to the destruction of Jerusalem, and the last 15, those delivered after the destruction. The first division may in turn be divided into two parts, with chs. 1-24 devoted to Israel in relation to the Captivity, and ch. 25:1 to 32:32 to judgments on surrounding nations.
Another interesting feature about the prophecies of Ezekiel is their accurate dating. The chronological table on p. 572 shows the dates for the various sections of the book as nearly as they can be tabulated from the chronological data provided by the prophet (compare the chronology of Jeremiah, p. 348).
Each main division subdivides itself naturally into its several sections through the interjection of the expression “and the word of the Lord came unto me.” This phrase appears 29 times throughout the book. The outline follows the plan of the foregoing suggestions:

Chronological Table of the Prophecies of Ezekiel