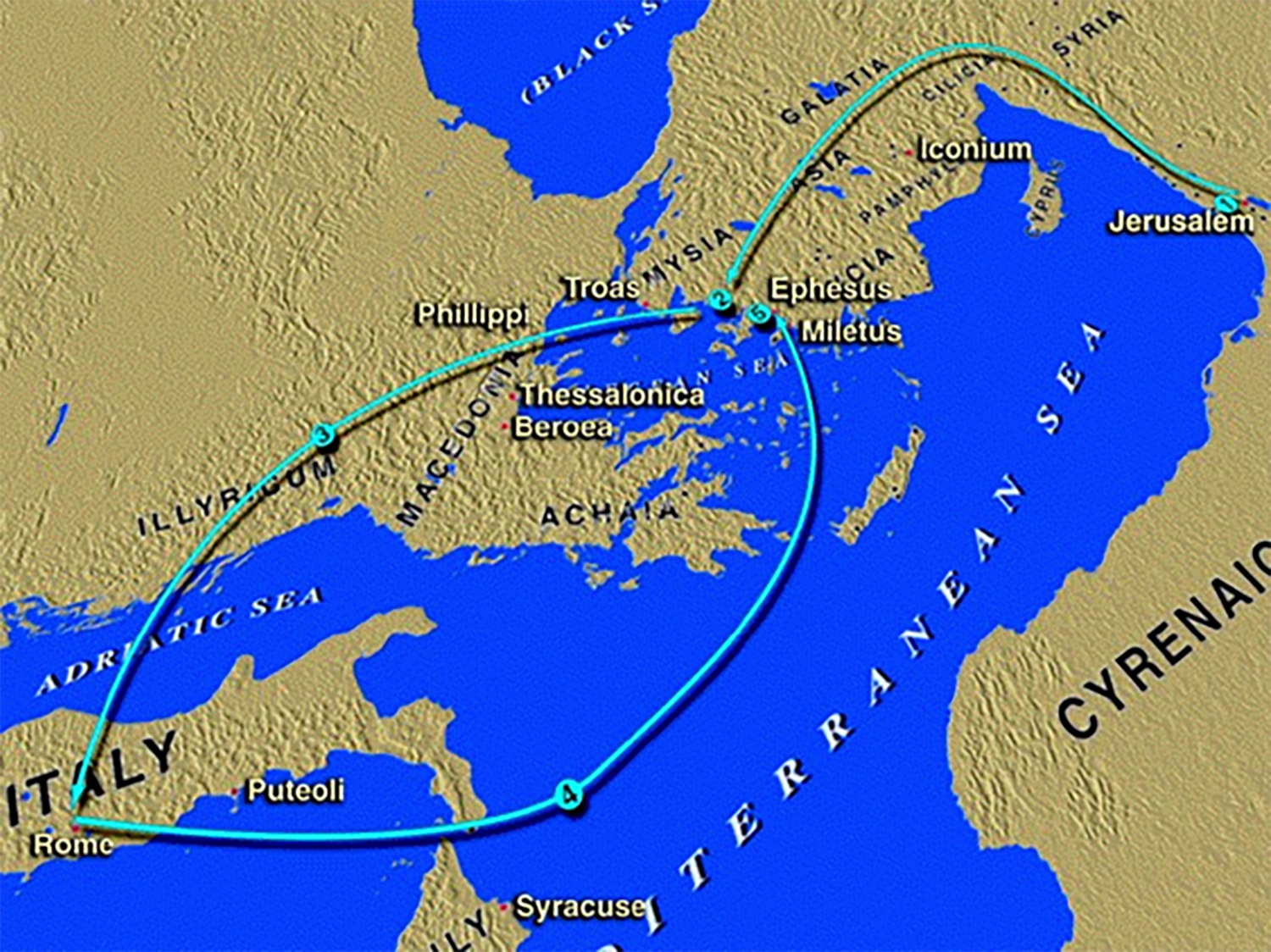 1. Title.
In the earliest Greek manuscripts the title of this epistle is simply Iōannou A, literally, “Of John, I,” that is, the First (Epistle) of John. There is no way of knowing whether this was the first pastoral epistle John ever wrote, but it is the first of those that have been preserved by the Christian church.

2. Authorship.
In none of the NT epistles credited to John does the author identify himself. Nevertheless, there is so great a similarity between the first epistle and the Gospel of John that most scholars accept the common authorship of the two works. If we hold that the Fourth Gospel was written by the beloved disciple (John 21:20-24), identified as the apostle John, a son of Zebedee (see Vol. V, pp. 179-181, 891, 892), we have valid grounds for holding that he is also the author of the first epistle bearing the name John. A similar relationship links the first epistle with the second and the second with the third. Some of the notable similarities in phraseology between this epistle and the Gospel are as follows:

In Greek the parallelisms in wording and construction are often more impressive than in English, but the above list gives the English reader a fair sample of the similarities.
In addition to near parallels in wording there are many other readily perceived similarities between the epistle and the Gospel. Both begin abruptly, without any formal epistolaryintroduction, one with “That which was from the beginning ... the Word of life,” the other with “In the beginning was the Word.” There is a close resemblance in style, in vocabulary, word order, use of prepositions, grammatical construction, the pairing of opposites, such as dark and light, death and life, hate and love, which is a distinctly Johannine characteristic. Though the difference in purpose and length of the two books permits great divergence, the subject matter of the two is so similar that the epistle may serve as a summary for the dominant themes in the Gospel.
Differences between the two writings must not be ignored, but may be accounted for on various grounds, such as differing objectives, dates of composition, the advancing age of a common author, and natural differences that exist in any works known to have come from the same pen. The epistle appears to have been written spontaneously as a pastoral letter, whereas the Gospel gives evidence of having come from long and profound meditation on the incarnation of the Word of God. To express the same observation in a different way, the objective of the epistle is limited while that of the Gospel is broad. Nevertheless, a common thread runs through both works and may be sensed by even the untrained reader.
However, scholarly opinion is still divided on the question of authorship. Some of the unwillingness to accept the apostle John as the author of the epistle may be due to subconscious wishful doubting. The conservative Christian may rightly declare that he has adequate ground for holding that John the beloved disciple is the writer of this epistle.
For a recent discussion of the problem see A. P. Salom, “Some Aspects of the Grammatical Style of 1 John,” Journal of Biblical Literature, LXXIV, Part II, June, 1955.

3. Historical Setting.
Since the epistle contains no specific reference to the author, to the people to whom the letter is addressed, to the place from which it was written, or to the time of its writing, conclusions relating to its historical setting must be inferred from internal evidence. Such evidence needs to be closely linked with the accepted conclusions concerning the authorship and date of the Fourth Gospel. Since this commentary favors the common Johannine authorship of the Gospel and the epistle, the main question concerns priority—which was written first, the Gospel or the epistle? No definite conclusion is possible, and scholarly opinion has been ranged on both sides. But it can hardly be denied that the epistle presupposes and draws on a background of such Christian knowledge as is contained in John’s Gospel. If this point be given decisive weight, then it appears that the epistle was written later than the Gospel, and may be thought of as a postscript to it. Alternatively, it will be readily acknowledged that before ever committing his memories and profound meditations to writing, the apostle would have thought of, and have taught to his flock, much of the contents of his Gospel. Thus it is possible for the epistle to have preceded the writing of the Gospel. From these and other more technical considerations, it appears that it is impossible from internal evidence to come to any firm conclusion as to the relative dating of the two works.
It is clear, however, that the epistle was written by an elderly man who could rightly address his converts as “little children” (chs. 2:1, 12, 18, 28; 3:7, 18; 4:4; 5:21). The destination of the letter is not stated, but it is obviously addressed to a known group of Christians with whom the revered author was personally acquainted. No conclusive reason has yet been advanced for rejecting the widely held tradition that it was written by John in his old age to believers Ephesus, or at least in Asia Minor, where he had ministered. The date of writing is probably during the first half of the nineties of the 1st century A.D. (see Vol. V, p. 892; Vol. VI, pp. 35, 36).
Evidence as to the existence of the epistle occurs very early in the 2d century. Polycarp, who is reputed to have known personally several of the apostles, has words that closely echo 1 John 4:3 (The Epistle of Polycarp to the Philippians vii, c. A.D. 115); and Eusebius states that Papias (c. A.D. 150) “used testimonies from the first [former] epistle of John” (Ecclesiastical History iii. 24). Irenaeus (c. A.D. 200) identifies several verses that he quotes as coming from the first and second epistles of John (Irenaeus Against Heresies iii. 16. 5, 8), and the Muratorian Fragment c. A.D. 170; see Vol. V, p. 127) not only includes the first and second epistles in its canon but ascribes them to the apostle John. The first epistle thus has early and reliable attestation, and its place in the canon is firmly fixed.

4. Theme.
The primary purpose of the epistle is pastoral. John writes lovingly to his spiritual children that they may be better able to live the Christian life. The keynote of the letter is love. The setting is a simple, yet profoundly spiritual, exhortation. God is love (ch. 4:8); love is of God (v. 7); God loved us and sent His Son; therefore we ought also to love one another (vs. 10, 11). But these lofty themes are portrayed against a background of opposition that gives the epistle a polemical as well as a pastoral aim.
It is clear that heresies had troubled the church, and that false teachers from within had tried to subvert the faith (ch. 2:18, 19). Although they had left the church, their influence lingered and threatened continued damage. John writes to counteract this danger, to establish the members’ grip on the essentials of Christian doctrine, and to make the truth so attractive that Christ’s followers will not be led into error.
The basic heresy against which John is contending has been identified as a sort of proto-Gnosticism, which taught false gnōsis, that is, false knowledge (see Vol. V, pp. 892, 893; Vol. VI, pp. 54-58). From the emphases given in the epistle it appears that opposition came from two main forms of Gnosticism, Docetism and Cerinthianism, both of which set forth heresy concerning the nature of Christ. Docetism denied the reality of the incarnation and taught that Christ only appeared to have a human body (see Vol. V, pp. 912, 913; Vol. VI, p. 58). The second heresy derived from one of John’s contemporaries, Cerinthus, who, after training in Egypt, taught in Asia Minor, and propagated Judaizing teachings. He held that Jesus was the natural-born son of Joseph and Mary, and that Christ entered the body of Jesus at His baptism and withdrew prior to the crucifixion (see Vol. VI, pp. 36, 57). The originators and supporters of these heresies are graphically described by John as “antichrists” (chs. 2:18, 22; 4:3) and “false prophets” (ch. 4:1). To combat these errors he stresses the reality of Christ’s visible human nature during the incarnation (ch. 1:1-3), that He did come in the flesh (ch. 4:2), and that believers may enjoy this true knowledge (ch. 5:20) as opposed to the false gnōsis.
These early controversies have significance for modern times, when the divinity of Christ is so widely questioned. A study of this epistle will direct the reader’s of the incarnation, and will confront him with an exalted vision of the Son of God, who was sent to be the propitiation for the sins of the whole world.